Rootkit is one or more tools designed to covertly keep control of a computer. These can be programs, files, processes, ports, and any logical component that allows the attacker to maintain access and control of the system.
The rootkit is not an evil software in itself, but it allows to hide the evil actions that develop in the computer, both through an attacker and also hiding other malicious codes that are working in the system, like worms or Trojans. Other threats incorporate and merge with rootkit techniques to decrease the probability of detection.

Rootkits are usually responsible for hiding the processes of the system that are malignant. They also try to disable any type of security software. Hidden activities are not always explicitly malicious. Many rootkits hide logons, process information, or records.

Initially the rootkits appeared in the UNIX operating system and were a collection of one or more tools that allowed the attacker to obtain and maintain access to the user of the most privileged computer (on UNIX systems, this user is called * root * and “There’s your name.” In Windows-based systems, rootkits have been associated in general with tools used to hide programs or processes from the user. Once installed, the rootkit uses operating system functions to hide itself, so that it is not detected and is used in general to hide other harmful programs.

There are other types of rootkits, which pursue the same purpose: hide activities in the system. BootRootkits Attack the boot sector and modify the boot sequence to be loaded into memory before loading the original operating system. Other rootkits attack, instead of the operating system, directly the applications using patches or injections of code and modifying their behavior with respect to the usual.

A seemingly harmless distraction during driving can dramatically affect the lives of other drivers, their passengers, and innocent bystanders. In the time it takes to send a text message or consult Facebook, you can have a serious collision. In fact, 18 percent of all fatal accidents are attributed to distracted driving.

A national road safety Administration defines distracted driving as any type of activity that could divert attention from the driving task. While most distracted driving accidents are related to cell phone use, there are many other distracting activities, including:

Although distracted driving is widely recognized as a national epidemic that threatens public safety, polls show that most teenagers and adults recognize their irresponsible behavior, but still continue.
How many accidents are caused by cell phones?

Every year, 1.6 million automobile accidents are caused by the use of the cell phone in the United States, according to the National Security Council.

Carlee R. Bollig, 17, from Minnesota was being booed by his friends to stop sending text messages while driving an afternoon in July 2015. She ignores her pleas, worked a red light and smashed into a van, killing two of her occupants. The accident claimed the life of Charles Maurer, 54 years old, and his 10-year-old daughter. 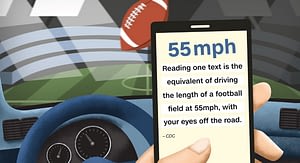 Last year, a Tennessee bus driver in charge of transporting the children to their homes, used his cell phone for text while driving the bus. In the seconds that his eyes were off the road, the driver struck another school bus and killed an assistant professor and two young children. His actions were the subject of an unfair demand for death.
Three teenagers from Houston were killed in March 2016, when the driver of his car swerved from the road looking at the GPS of his phone. His vehicle crashed head-on to an 18-wheeled truck. The girls were on their way home after a spring break vacation in South Padre Island.

The Federal autotransports administration found that sending text messages and driving their cars is 23 times more likely to be involved in a car accident. Smartphone ownership has increased dramatically in recent years, and which means that texting and driving has become more of a problem. 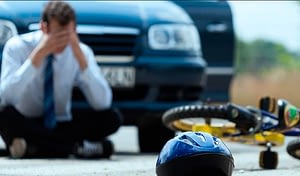 A driver who is sending text messages is 6 times more likely to get in an accident than a drunk driver.
Text messaging requires you to take your eyes off the road for at least five seconds, which is the equivalent of driving the length of a football field when traveling at 55 mph.

How many deaths a year are caused by text messaging and driving?

Distracted driving statistics drawn up by the Texas Department of Transportation indicate that 483 people were killed in the state during 2014, and more than 3,000 serious injuries in distracted driving accidents.
In the past years, 6,000 deaths in the United States were caused by distracted conduction; Reports have not distinguished how many of these deaths were caused by drivers who were sending text messages.

Most states have passed legislation banning text messages while driving under any circumstance. Texas is one of a handful of states, like Missouri, Arizona and Montana, who still have to dictate extended text messages and conduct laws prohibiting the use of portable technology. Several attempts were made to move from a state prohibition of text messages and driving, but every time the bill has died, vetoed or defeated in the Senate.

However, many cities in Texas have severely banned or limited the use of cell phones while driving.

Can you be considered responsible for sending a text message to a driver who has a car accident?
According to a new Jersey Superior court ruling, individuals may have some responsibility if they “knowingly fit into distraction behavior” by text messages a driver who knows or has reason to believe sees the message while driving.
The opinion means that, in the state of new Jersey, it may be held civilly but not criminally responsible for sending text messages to someone who is blocked after receiving and reading a text. The verdict aroused controversy and a lot of legal debate.